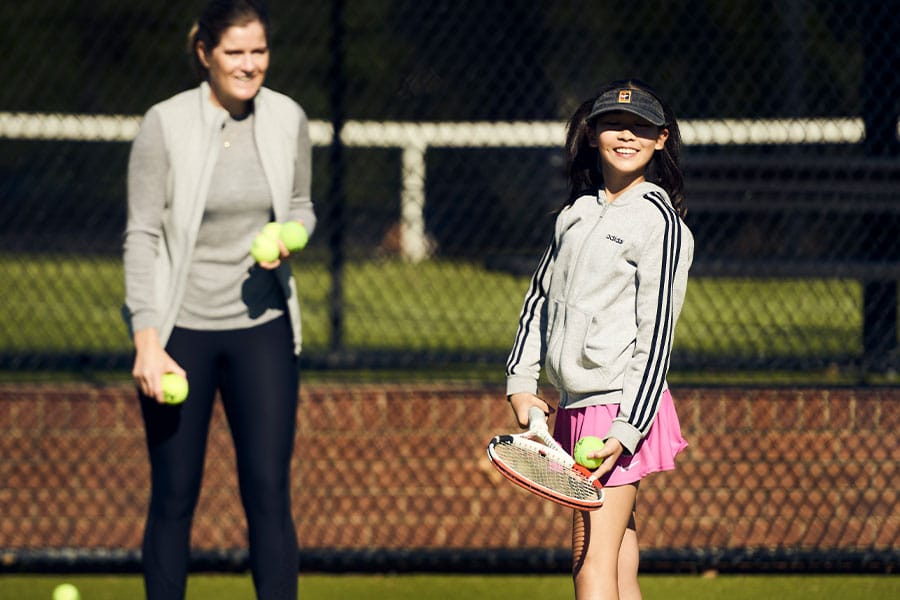 The Australian Open is about to start and while it’s been a slightly bumpy start to the tournament season in Australia, it hasn’t dampened kids’ enthusiasm for the sport of tennis.

Does your child love watching the big names hit the court?

Do you have a mini-Rafa or future Ash Barty at home but you’re not sure where or how to start or continue their tennis journey?

We chatted to the super interesting [and crazy experienced] Sergio Rojas Tessel at Highlands Tennis in Moss Vale [they’re on Railway Street next to the community garden] about game-based coaching and loved the team’s approach to how they run their tennis lessons.

While being able to hit a forehand or serve or volley is important, it’s not all about technical skill…..they incorporate so much more into what they offer, and it benefits the kids big time.

Here’s our chat with Sergio about the way they do things at Highlands Tennis.

What do children find challenging about traditional tennis coaching methods?

A more traditional approach focuses on the technical side of tennis, rather than playing the game.

A lesson might be a coach throwing a ball at you for 15 minutes while you hit a forehand. Then another 15 minutes of backhands, then volleys and serving and then that’s it.

It also means they don’t get to actually play the game, or learn how to score or understand the context of their skills until much later.

That can be quite boring for kids, especially in this era, where they’re more wired to instant gratification thanks to video games [who are our biggest competitor here!].

How is game-based coaching different to the traditional approach?

It meets the child where they are – their skill level, their age, their physical development – and provides a structured and fun pathway for them to build their skills in all areas of their development and co-ordination.

This keeps them engaged and really enjoying their tennis.

So, it’s rare for a kid to not come back after a lesson or two?

Very rare. Plus, the way we run tennis lessons in a group environment is very social – they make new friends easily.

Okay, so tell us more about how a lesson is structured at Highlands Tennis using game-based coaching?

Depending on their age, each child will be placed into one of our FUNdamentals, Junior Development or Junior Performance groups.

Then they’ll work their way through a list of milestones and achievements to move through the program’s levels.

And it’s not just tennis milestones they focus on, especially for the younger ones, right?

That’s right. The really good thing about this program is that we use equipment and milestones to suit the child’s age and body development.

So, an example of that is we play pickleball in the group lessons we have for 6 – 9-year-olds.

It’s based on tennis, but we use a smaller net, they have a small bat, and the balls bounce lower so they’re easier to hit.

The equipment and game is adapted around their skill level but also their body composition [height and strength] which means they’re able to achieve success very easily so they can keep moving onto new milestones.

This gets them into game-playing mode much faster [and with more confidence] than the traditional approach to tennis coaching.

The confidence part is really important.

Absolutely. Many kids give up on traditional tennis lessons early because they think they’re no good at it.

But that’s not true. It’s just that approach doesn’t allow them to build a range of skills and achieve milestones.

Game-based coaching builds that confidence and builds it quickly. It’s a much more engaging way to teach tennis.

The confidence extends beyond the tennis court too, right?

Yes, the way we coach tennis means that it’s easy for kids to transfer those skills across to other activities in their life, whether that’s playing cricket with their mates after school or playing handball during their lunchbreak with friends or whatever it may be.

And you’ve got a nifty way to track the kids’ development that includes the kids, the coaches AND the parents. Tell us more about that.

Now, the online portal is how we track each child’s development as they achieve their milestones.

And a very cool thing is that parents can get involved.

So let’s say your son, Charlie had completed 7 of the 10 tasks/milestones for the term but was still struggling with say a topspin backhand, you can watch videos on the portal and help him practise it during the term break. You can also take a video of Charlie completing the task which one of our coaches can check, and if it’s all good, we can tick it off.

It’s another way to keep kids engaged, give them control over their own development and keep them moving forward.

So good! Getting parents and families involved is important to Highlands Tennis too, isn’t it?

We’ve created  a really nice community here and encourage all members of the family to come and play.

Towards the end of last year for a couple of hours on a Saturday morning, we invited families to come along for a hit – there are five courts here so there’s plenty of room.

At the start, each family was playing amongst themselves but by the end we had all the families mixed in together – kids playing kids, parents playing parents, kids and parents playing mixed doubles. It was great to see.

Many parents comment on the community and social atmosphere we’ve got here. They come and chat to other parents while the children are having lessons. They don’t stay in their care It’s a good way for parents of younger kids to meet new people.

And the kids create new social networks too.

That would probably have something to do with the lovely bunch of coaches!

We have a great group of local coaches.

Jack, Mabel, Michaela and Megan have worked with me for 2-3 years and have various levels of Tennis Australia coaching certification.

The team is growing too. At the end of last year, we qualified as a business to sponsor overseas coaches. In 2022, two coaches from France and another coach from Argentina will be joining us. They’re all top level coaches – one of them has played professionally and the other two have played at college level.

It’s exciting to see the team and Highlands Tennis grow.

We hear some pretty awesome feedback about your school holiday camps that actually aren’t all about tennis!

We run school holiday camps at Tudor House and yes, we mix it up for the kids.

They will be playing tennis of course [+ current students can use that time to work on their milestones and pathway] but we also have access to the pool so there’s regular swimming which is great on hot days.

We have team events too and do things like dodgeball, capture the flag, climb the ropes, play football and more – it’s a real mix of activities which once again is all about keeping them engaged.

Over 60 kids came to the one before Christmas. It ran really well, and the kids loved it.

Okay, so what should parents do if they’re keen for their child to give the Highlands Tennis game-based coaching approach a go?

Head to our website where we have the learning pathway programs and levels on the home page.

Give me a call on 0456 111 094 or email sergio@highlandstennis.com.au for more information.

Another way lots of kids join Highlands Tennis is by coming to a school holiday camp and getting a feel for what we do there.

And of course, you can come and see us at the Moss Vale Tennis Club which is on Railway Street [next to the community garden] in Moss Vale. The centre is looking fantastic thanks to some amazing work from the tennis club committee – the courts have been resurfaced and there’s new fencing.

It looks great and has a great atmosphere. It would be awesome to welcome more locals to be par of what we’ve created at Highlands Tennis.

Sergio Tessel
Sergio Tessel
During his professional career Sergio has lead tennis programs in Argentina, the United States, Middle East and Australia and has been the main contributor to developing junior players such as Argentinian Maria Tania Abraham, Belgium's Marco and Mario Dierckx and most recently, Juan Martin Jalif, all of whom have reached Grade 1 ITF Tournaments.

Some benefits of playing tennis

There are countless benefits to playing tennis. Here are some examples: 🙄 Tennis is a game of emergencies and problem-solving.…
Menu